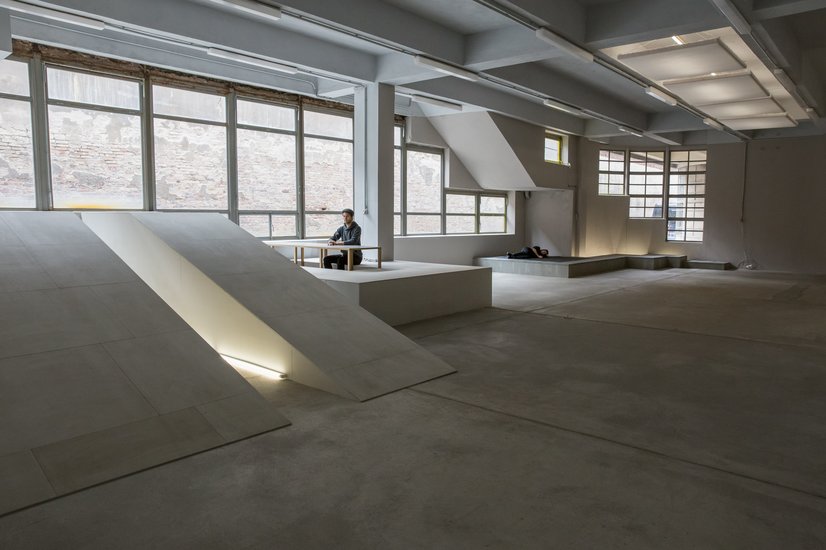 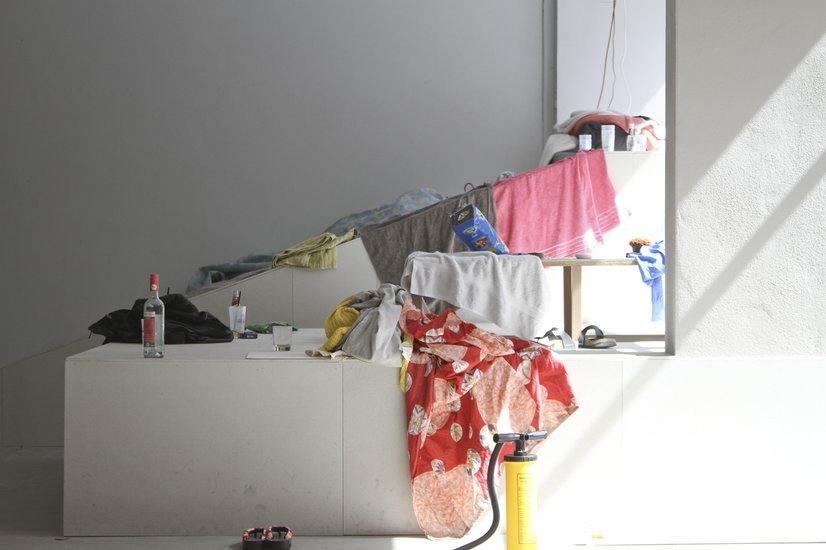 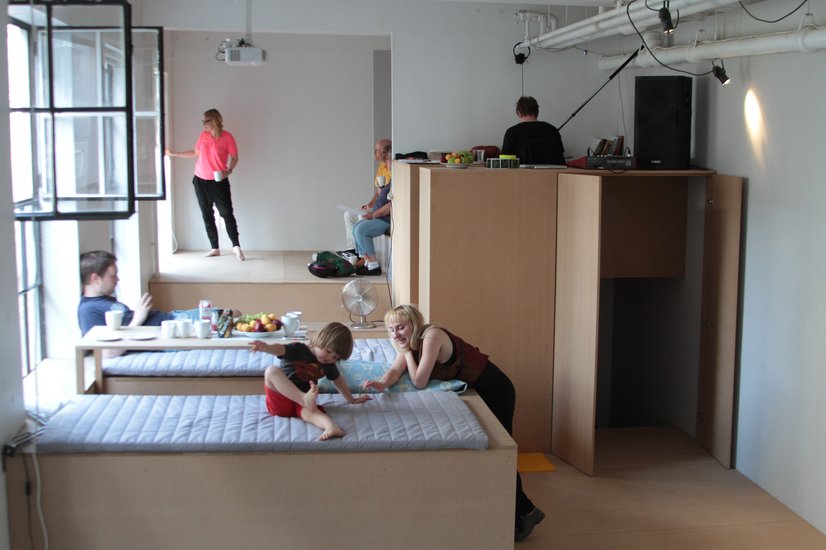 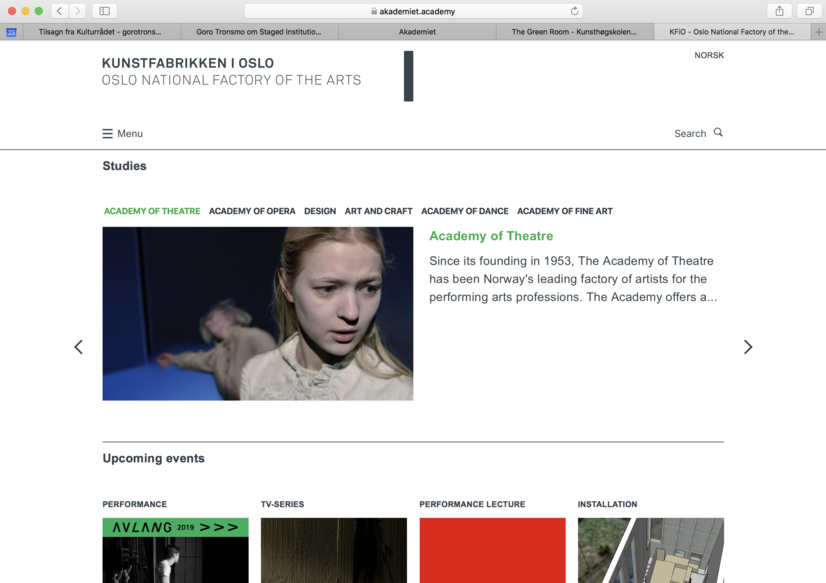 Trailer for “AKADEMIET”, the re-enactment of Von Triers “Riket”: https://akademiet.academy/pages/akademiet.html

Trailer for “THE ACTORS”: https://akademiet.academy/pages/theactors.html

2019
- “Staged Indstitutions III – The Arts Education Factory”. A total staging of Oslo National Academy of the Arts.
The project consists of a website doubleing KHiOs own website, an architectural installation converting the potential use of the schools most beautiful dancesstudio, a re-enactment of Lars von Triers “The Kingdom”, a dogma film based on alter egos of the schools acting student, a performance about the theatre architecture of the theater academy, and a choreographed tour around the complete premises of the performing arts faculties. Performances May – June 2019. The filmprojects and the website as performing platform will continue through 2022.

- Spatial concept and architectural installation for Constance Tenvik ́s installation at the Astrup Fernley Museum for the exhibition “Sun and Spring in Januar”, January-May 2019. The exhibithion also consisted of an artwork that framed the sunlight from the outside and created a light-installation of a sunbeam moving through the room as the day and season passed.

2016
- Installation for the project “Repair/Service” in Berlin.
Installation in a basement location inverting the relation of climbing down/climbing up/climbing inside. The installation worked as scneography for an art project posing as a repair store. Collaboration with artist/designer GFS.

- “The idea of the kitchen”. Architectural structure researching framework of public vs domestic spaces. Developed for i,ii-xi, a talk series at “invitation.of.sorts”, Los Angeles, curated by Shoghig Halajian, Andrew Capervitz and Suzy Halajian.

2012
- “Muscle Temple – Malmø”, for Inkonst, Malmö. Installations for the architecture of the building using all the rooms/corridors/outside to confuse the identity of the venue as night club, fetish lounge, gym.

- “Fittja Centrum”. Context specific project for Botkyrka Konsthall/Yapp, Stockholm, using hidden actors staging the shopping center of the suburb Fittja. Fittja is the location of one of Palme ́s Million programme housing projects of the 60-70ties.

- Direction of the film “Untitled Epilogue”. Collaboration with Johanna Domke.
The film is using the architectural premises of EMPAC, Troy, USA as part of a fictional/ documentary script.

- “Muscle Temple – Oslo”. Performance, reality project, film and web project, first premiered as performance at Black Box Theatre, Oslo, transforming the complete premises of the theatre into a night club, and the neighbouring building into a (fake) gym. The film and realityproject stages members of the scandinavian performing arts scene in a looping game of creating a non-product. www.muscletemple.no

2009
- “enter one”. Solo exhibition at at Christianssands Kunstforening, consisting of 3 videoworks.

2008
- “und• er re• al 1”. Performance incorporating the curatorial, spatial and technical parameters of the main stage at Black Box Theatre, Oslo versus the Brooklyn performing garage The Collapsable Hole, NYC as part of the narrative, mirroring both the venues and their relation/inpact on the post-dramatic form of the performance.

- “Story” Performance lecture under MIT-DEMO in Malmö, based on the black box in the former brewery at The Swedish Theater Academy, Malmö.

- “a city is a body (I am a city)”. Solo exhibition at UKS, Oslo as part of ”Performance program 07”, consisting of three multi channeled video installations based on performative work. Included artist talk as dialogue with Kristian Seltun.

2006
- “auvirkomma veiklinga”, performance using the architectural connotations of various abandoned, public or closed off spaces of Oslo as part of the project.
Performed in Oslo City Jail, Sagene swimming hall, Oslo City Hall, the escape tunnels under the train station at Nasjonaltheatheateret, Borgen Culture house (factory complex used as artist studios) and in the foyer of Black Box Theater. Location project developed/organized by Mari Staurnes on commission by GT.

- SWIMMING POOL, architectural installation for „Pane Per Poveri – 72 hours“ at Lido, Venice during the opening of the Venice Biennale. Collabortation with Pontus Lindvall and GFS.

2012—— Participation in the performance project The Broadcast Party at Black Box Theatre, Oslo,curated by Anders Paulin and Anders Mossling.

- Installation for “Samhällsverkstan” by Mossutställningar, Stockholm
Installation based on the architecture, hidden performative strategies with actors, and video.

- Muscle Temple, TOU at TOU-Scene in Stavanger. 200 m2 spraywork for ølhallene in collaboration with Kine Lillestrøm. Hidden performers on the opening doubleing a videoinstallation.

2015———- “THE LIFE TO COME” exhibition at ØYA festivalen 2015. Curator of context spesific commissions for the festival and in charge of developing structures for displaying context spesific art at ØYA. With Marius Engh and Jordan Rosenfeld, Pontus Lindvall and Laida Aguirre.
Architecture: Goro Tronsmo and Kyrre Heldal Karlsen.

2014—— Curator of the work “SCREAM UNTIL YOU LIKE IT ́” by Yngvild Rolland for the entrance of the ØYA festival, Oslo in addition to developing architectural and structural platforms for visual art commissions for ØYA in collaboration with Kyrre Heldal Karlsen and Ingeborg Staxrud Olerud.

2010-11—— Establishing “Muscletemple, Stockholm” as a reference to the Berlin concept, with a gallery connotation based on the current art scene in Stockholm and the location in the famous functionalist building by Sven Wallander at Kungsholmen.
A series of site-specific installations curated to confuse the identity of the venue.

2009-12——Staging of a series of parties, concerts and performance events at a fake club – “Muscle Temple Berlin”, in a location above the old fitness studio Muscle Temple in Adalbertstrasse, Kreuzberg. Collaboration with graphic designer Petri Henrikson.

2020—— Teaching MA students at KHiO, Academy of Theater on site and contexts spesifity.
2018——- Lecture and podcast as part of lecture series at Dramatikens Hus, Oslo.
Goro Tronsmo on: Institutional Stagings

2014/15——Supervisor of Masterstudent in performance studies at Oslo and Akershus University College. (HiAO)

2013——— Lecture at “Open Forum” for BA and MA students at Oslo National Academy of the Arts. (KHiO) Norway.

2012——— Nordic representant at “BIBU”, Lund. Development of performance lecture for public presentation based on workshop with other Nordic performance artists.

- Lecture at conference for art for children and youth, Arts Council Norway.

2011——— Lecture on the congress ”We try to plan it so perfectly” arranged by Kunstløftet, Arts Council Norway. Curated by Rickard Borgström.

COLLABORATIONS/ACTORS INSTRUCTIONS ON OTHER ARTISTS PRODUCTIONS

2009——- Direction of actors and casting for Mai Hofstad Gunnes film ”An everywhere of Silver”.